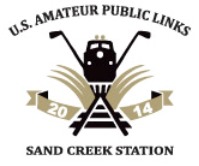 The 2014 playing of the USGA’s Amateur Public Links tournament (APL) will be the 89th time the tournament is held. It will also be the last. The tournament is being discontinued in favor of a new team format the USGA will roll out next year.

This playing of the tournament also represents a first – the first time it will be played in the state of Kansas when it comes to the Sand Creek Station Golf Club on Monday, July 14 through the 19th. Kansas Citians who haven’t ventured the short drive to Newton, KS to experience Sand Creek Station firsthand have been missing out on a great golf course and a great experience for eight years now. The course opened in 2006 and since then, it has consistently placed on numerous “best places to play” lists within the state and nationally.

Sand Creek Station’s General Manager, Chris Tuohey said, “We found out in September of 2011 that we would host the APL and then about a year later in 2012 we had a meeting with current USGA President Thomas O’Toole and we were then told that we would have the honor of hosting the final Amateur Public Links.” 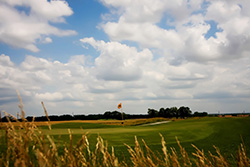 Jeff Brauer designed the course to play homage to some of Scotland’s greatest courses, using the nearby railways as a feature to evoke the old world feel. A series of tees helps the course appeal to a broad array of golfers, ranging from 5165 yards all the way to the championship tees at 7359 yards. The USGA has noted that the course will play right at those championship tees, listing an official distance of 7365 yards. The course will be closed for the tournament, but anyone can play it until July 10 or any time after the champion is crowned, including July 20 – the very next day (subject to availability).

The tournament itself is a throwback as well – a way to encourage the public game by requiring entrants to be true public course golfers. The tournament disallows golfers who are member of or have member-like privileges at any private golf course. In recent years, the tournament has been dominated by elite college players, making it a bit of a replica of the field and contenders seen in the US Amateur. That development has led to the decision to end it after this year for both men and women, replacing it with a new four ball championship.

“This tournament has done so much for public golf – it has given public golfers, who are the core and the strength of the industry, a chance to be a special part of the USGA national championships,” Tuohey said. “We cannot thank the USGA enough to have hosted this great championship through the years, and we are very honored to have this part in its history.” 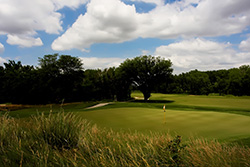 The format of the APL tournament is a mixture of stroke play and match play running from Monday, July 14 through Saturday, July 19. The starting field of 156 golfers who qualified through various means, including local qualifying tournaments held across the nation, will play two rounds of stroke play on Monday and Tuesday. The low 64 golfers will then move on to match play in a one-to-one tournament style similar to the NCAA basketball tournament most people are very familiar with. Lose one match and you’re out. The winner will have to win six matches to advance through the entire field and win the final, 36-hole championship match.

Of the planning and preparation that goes into a tournament of this magnitude, Tuohey shared that, “It takes a lot of careful planning, not only with the course but also locating volunteers, planning all the logistics, and so many other details. It really has been years of in the making.”

“The toughest part of this whole preparation has been dealing with the things that are outside of our control, particularly the weather,” Tuohey mentioned. “The USGA recently visited and was very pleased with how the course has recovered from the winter we’ve had and other stints of tough weather. The course is in the best condition it has ever been, and all the credit goes to our great staff – they have worked hard to get everything in shape.”

Locally, there were two qualifying tournaments in June. Those wanting to cheer on our competitors from around these parts will get their opportunity as Michael Greene (Overland Park), Chase Hanna (Leawood, KS), and Michael Gellerman (Sterling, KS) are set to tee it up alongside the nation’s other top amateur talent. Greene progressed through the Swope Memorial qualifier on June 17th, posting a 6-under 138 combined score over two rounds. Hanna took the first alternate spot and was recently notified he will join the field as well. Gellerman also posted a 138 during his qualifier at Wichita’s Auburn Hills Golf Course. Zach Kirby from Dodge City, Steve Groom from Raytown, and Shane Gilbert from Derby will serve as alternates with an opportunity to make the field. Calvin Pearson, a South African native and member of the Wichita State golf team, also advanced through an Oklahoma City qualifier and will make an appearance as well.

“I’m pulling for all our local golfers and really glad to see that Chase Hanna made it into the field – we would like to see all our local guys do well,” Tuohey noted.

Winning the tournament is more than a pat on the back, “good job” reward that amateurs have to usually accept. Besides the trophy, the winner also gets an invitation to the next Masters – a tournament all golfers dream of playing, whether from the public course ranks or the country club scene. In addition, the winner receives invitations to other USGA tournaments, including the next two US Amateurs and a pass from local qualifying for the next three US Opens.

In the storied history of the APL, there have been a number of now-famous golfers who made their mark with the USGA before doing so on the PGA Tour. 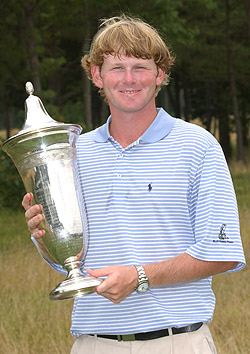 Brandt Snedeker is a six-time PGA tour winner who has represented the US in both the Ryder Cup and Presidents cup. He also won the 2003 Amateur Public Links when he birdied five of his last nine holes.

“I was nervous the night before,” he admitted in a recent interview, “having a chance to win and qualify for the Masters, and then when I played so well, I remember the excitement of it…it was a huge win for me. I gained a lot of confidence from that and then to play in the Masters, I saw how I stacked up against great players, which was really helpful because I was getting ready to turn pro…The APL really helped me launch my career after college.”

He went on about the nature of the tournament, saying, “The APL is about the public golfer. It represented the idea of guys playing against each other on public courses all over the country.” 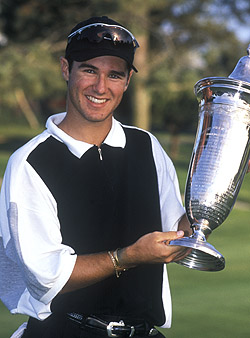 Another former champion is South African Trevor Immelman who also launched a pro career that eventually led to becoming the 2008 Masters. But it was ten years prior to that, in 1998, that Immelman won the APL. He won, coincidentally, over another future major winner, Jason Dufner, in their finals match.

“My goal as an amateur was to qualify for the Masters and the year before I had lost in the final of the British Amateur. I was really gutted. I was 17 and thought my world had come to an end. So winning the APL, there was a lot of sweetness in that.”

He also reflected on the tournament coming to an end, “I was sorry to hear about it not being played anymore. It will be missed for sure in the golfing world. You look at that trophy and there are a lot of guys whose names are on there who went on to have great careers [as professionals].”

With preparation almost complete and everything falling into place, Tuohey said the last things to do are locking down some final logistics and getting the right help for the event. “We could use a few more volunteers in a few areas to fill in our team. This would be a great opportunity for people to be a part of history and get to see the course and the players up close.” Anyone wanting to volunteer can simply sign up through their website www.sandcreekgolfclub.com – the entry form and instructions are near the bottom of the homepage.

Otherwise, admission to the APL is absolutely free, so anyone wanting to see the course under championship conditions with some of the nation’s best players battling it out, will need only to show up in mid-July.